Why Do We Care? 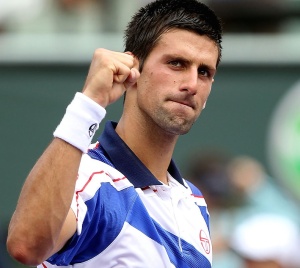 I have a new celebrity crush.  Actually, a sports celebrity crush.  He’s Novak Djokovic, Tennis Phenom who just unfortunately lost the French Open this week.  I know basically nothing about him, other than he’s Serbian, late 20’s, an incredible tennis player, athletic and… well, hot.

I became aware of him simply because he was on my TV this weekend, and from a charming short video of him shared by the fun folks at Brains on Fire.  (Check out the link at the end of my post, it will make you smile.) So now because of a two-minute video I’m convinced he is a nice guy, which adds to the appeal.

And so it goes with us Real Women and our interest in the “others” – ie: the successful, the rich, the famous.   We build our judgements based on the media and the magic of the big and small screens.  I’m not one who generally follows the news regarding celebrities.  I can’t tell you who’s married to who (unless it is an in-your-face famous couple like Blake Shelton and Miranda Lambert), nor who split up with who, who has children, who lives where, etc, etc.   Some people are more interested than I in the world of the rich & famous and follow the celeb gossip and news, or maybe they just retain that information better than I do.  I have one BFF, for example, who just seems to know celebrity news.  I can be watching a movie with her, and say “oh, didn’t she star in that other movie with that guy, you know, the one who…” and she will reply with the star’s name, marital status, and past accomplishments.  It is really quite handy to watch TV with her.

But honestly, for the most part, I’m just not that interested.  I’ll catch some breaking news story about some Hollywood couple who has decided to “consciously uncouple”, or who’s child just got in trouble, or who has just had more plastic surgery, and I have to wonder “why is this news?  Why should I care?”   We all have plenty of friends, family and associates who go through major life changes, but THEY aren’t in the news.  So why is it any of my business when a perfect stranger is going through something?

I have a hunch that we “care” because we don’t see our favorite celebs as strangers. Between TV, movies, social media and supermarket tabloids, we welcome these people into our homes over and over again, and spend hours with them each time.   These one-sided relationships can last for years.  When we are long-term fans, we start to build an illusion that we know them.  In each role they portray, we feel like we get a little glimpse of who they are – momentarily forgetting, of course, that they are acting (or performing, or competing…)… hence why I’ve always believed that Tom Hanks would be the perfect husband, and that Sandra Bullock and Meg Ryan and I should be BFFs.   Ah, yes, just like my English teacher taught me, the art of  “suspension of disbelief” works like a charm.

Of course, part of the attraction is just our plain ol’ fascination over their lifestyles, because they are seemingly so very different from ours. The high fashion, the amazing real estate, the travel, the parties… it just seems so foreign to our day-to- day lives, we can get mesmerized by the concepts of “how the other half lives”.  We just want to see what a gold toilet seat or a $80,000 dress looks like.

And beyond the glitter — if we are going to be honest here — don’t we Real Women want to somewhere, some how, on some level, find out that the “others” have at least something in common with us?   Don’t we want to know that Maria Carey’s twins puked on her as she headed out the door all dressed up?  Or that Sophia Vergara looks ugly and bloated at least once a month?  Or that JLo is stressed out trying to fit in 15 errands before her next gig?  Or that Jennifer Aniston finds a new wrinkle in her mirror every morning, or that Katherine Heigl is fighting a muffin top?  Just having one shred of evidence that they feel the same struggles and strains that we do somehow makes us feel a bit better, doesn’t it?

As for those hunky Leading Men and Athletes… they just feed into our childhood dreams and fantasies that perfect men exist.  Since we only know these men by how good they look, and the roles they portray or the athletic feats they accomplish, we can fill in the blanks with our imaginations.  Of course they are wonderful, caring guys who put a woman’s needs first. Of course they take out the trash, do the dishes and mow the lawn (shirtless, naturally) without complaint. Of course they are never, ever grumpy, and they love to bestow compliments and back massages upon the women in their lives.  They are seeking not another boring, beautiful rich starlet, but a slightly overweight, over-tired, hard-working middle-aged Real Woman to enrich their lives.

Ah yes…. Those “others” really and truly are there for our entertainment.  That’s what we care about. Play on.

1 Response to Why Do We Care?