The Lost Art of Meandering

It never fails. I’m tight on time, need to get somewhere quickly, and I get caught behind a slow driver.   It could be a trash collection truck, a piece of farm equipment, a student driver or an elderly senior.   Whatever the reason, the vehicle in front of me, in a no-passing zone, is not going fast enough for me. And I start talking to them as if they can hear me. I drum my fingers on my steering wheel. I fidget in my seat. One would never know that I am normally a patient person.

We Real Women spend our days on “beat the clock mode”, packing the proverbial 100 pounds of stuff into a 12 hour day…each duty, responsibility, or chore, planned down to the minute – and anything that gets in the way of that planned time frame is a frustration.

The other day I had a short slice of time before my son’s birthday party to run out and pick up balloons and bags of ice.   Lo and behold, I got behind an older couple travelling 24 miles an hour in a 45 zone.  When I “finally” reached the grocery store, I grabbed a cart to head down the necessary aisle and got “stuck” behind a browser. You know those shoppers, the ones who are walking at about .03 miles and hour, slowly scanning all items on the shelves, usually traveling down one side of the aisle while a family of four is parked on the other side of the aisle discussing cereal.

Now in reality, these slow-downs likely only cost me a total of 10 minutes. But at the time, those 10 minutes felt like an eternity. I have a couple of R.W.’s in my life who are now having to participate in practice drives with their own young “student drivers” in their families. And they both report how much longer an errand takes with a very cautious early driver behind the wheel. It seems when we are not in total control, going whatever speed in life we want to be traveling, we feel pressured by not being able to beat that clock, and having to constantly adjust our plans.

When I was behind that elderly couple in my car, and when talking at them seemed to produce no results, I began instead to talk to myself. I started doing some deep breathing, then started discussing what items could come off my to do list if I got too delayed.   And I realized that unhurried drivers and dawdling walkers are put in front of us by some higher power to quite literally slow us down. If those slow-pokes weren’t in front of me, I likely would have been speeding…. which besides being dangerous, could have resulted in being pulled over and thus wasting even more time and money.   That grocery plodder forced me to slow my pace and breathe, something I likely needed before facing a pool party of teenagers.

If we didn’t have this constant “need” to rush, to fit more into our days, to hurry from one thing to the next, how different would our lives be?   The other day my sister sent an email that included an ad featuring the perfect outfit for “a long wander.” My friends and I all decided we wanted the lifestyle that would require a dress to go wandering; how lovely to need something fashionable to go meandering about. Then we all tried to remember the last time we actual meandered – anywhere. I suppose it is possible to wander, to stroll, to take ones’ time…but that only seems to happen during planned vacations, or maybe during get-togethers with friends. But never in day-to-day Real Woman life.

At some point, I have faith that will change. That couple in the car ahead of me was clearly in no rush at all. They had plenty of time to get wherever it was they were going. Perhaps they were driving to the park to go meandering. Perhaps they were headed to the grocery store to wander the aisles.   Considering this, I felt my frustration ease, and turn into admiration with a touch of jealousy. God Bless Them. I thought about how I can look forward to someday being like them. Some day I too can take my sweet time doing anything or going anywhere, and I can chuckle as I watch the frantic and frazzled women in their mid-life stages running like lunatics from one thing to the next, and think “ha, I was you once.”

When I reach that stage, I’m going to go out and buy myself a fashionable outfit for wandering.

But in the meantime…. Please turn at the next intersection — you are in my way. 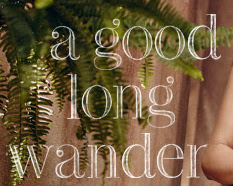 2 Responses to The Lost Art of Meandering