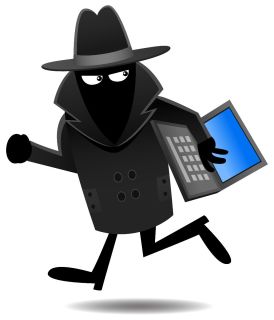 When I was a young girl, our house was broken into and robbed. Actually, “broken into” isn’t really accurate. Back then, we lived out in the country, in a lovely little town, and we didn’t lock our doors. I know, sounds crazy now, right? It was a different world then. My mom had taken my brother to a weekly appointment, and while they were gone we figure the thieves had been watching her regular schedule and knew they had some time to let themselves in and do some free shopping.

This was many years ago and I was young, so the details in my memory bank are sketchy at best. My older siblings probably remember it better. I do remember that we thought perhaps mom had scared them off when she arrived back home. One of our oriental rugs was rolled up and waiting by the back door. We found one of our trash cans in the woods behind the house, which was likely the carry-all for what they took. I don’t honestly remember what we lost that day, other than some jewelry from my parents. Whoever it was had gone through our rooms too, but clearly had no desire for kids stuff.

By the time I got home that day, most of the initial panic was over. The police had come, and mom and dad were doing their best to get things back to normal. What I recall though, is that scary spooky feeling that someone we didn’t know had been in our house going through our things. We had been violated.

It wasn’t until years later that I thought about what that had to have been like for my mom. It’s funny how we women don’t necessarily think about everything our mothers did, and went through, until we are adults and moms ourselves. For some of us, unfortunately, by the time we are at that stage in life, it is too late to ask mom what it was like for her. When she arrived home that day, my mom was alone with her blind son. She had to have quickly seen what had happened, and had to have determined if anyone was still in the house. She had to have called dad, and the police. She had to have done a report, gone through the house, done insurance claims. Did she cry? I don’t know. Did she scream and yell in anger? I don’t know. Was she scared from then on every time she left the house or was alone? I don’t know. I know I would have done all of the above. But for us, she put on her in-control-brave-mom face.

This event has been on my mind today because – flash forward about 40 years – this weekend I happened to go online to do some banking and bill paying, and quickly determined that someone had gotten my debit card number and pin number and had stolen a substantial amount of money out of two of my bank accounts. My first reaction was disbelief. My husband and I both looked again at the activity online, then the panic started. We tried calling the number indicated to report a stolen card, and because it was a Saturday night, got stuck on hold forever. In the meantime, luckily I found a way to deactivate my debit cards online. Once that was done, the panic of having lost money crept in, along with the worry about being able to pay the bills. We started trying to analyze how it could have happened. Whoever it was had used an ATM machine on Madison Avenue in NYC to deduct large sums – apparently knowing that those ATMs must allow larger withdrawals than most. We determined that I must have been a victim of a skimmer, and started trying to think about where and when it could have happened. And that old yucky familiar feeling crept back in. We had been violated.

The next day, as I shared my story on Facebook, it was amazing the number of people who chimed in with a similar “that happened to me too” story. Credit cards, bank accounts, debit cards – all compromised at some point. I wonder now if it is like cancer – where one in eight women have been somehow affected by this issue in their lifetime. Everyone you know has a story to tell about being robbed in a related way. It is as if this is the modern version of that home robbery. Sure, unfortunately, physical robberies still happen – but this evil and sneaky form seems more prevalent in our modern world. Yet no matter how much we try to virtually lock our doors with passwords, pin numbers, and being careful of our locations, we still aren’t safe.

The difference now, thankfully, is generally the resolution is speedier and easier. I went to the bank Monday morning, got my cards cancelled, new ones issued, and a report filed. An investigation has begun, and I was assured that within 10 days, our funds will be replaced. My mom and dad weren’t so lucky. I’m sure the whole process of a report and investigation was much lengthier back then, and I know the items they lost were never returned. Their feelings of ickiness, sadness, and anger I’m sure lingered for a long time.

My sadness and panic switched over to anger pretty quickly. When the woman at the bank asked me if they ever caught the person(s) who took my money, would I be willing to prosecute, I said “darn right I would.”   I’d feel better about a destitute person on the street pick-pocketing me because I’d at least understand that they were desperate and in need. But this? Whoever did this has the brains enough to pull off a skimming racket and get to NYC to withdraw the money and spend it. If they are that smart, they should have a job and have to work hard for the money like I did.   Part of me wants to know what happened next. Way back in my childhood home, what did the thieves do with what they took? Did they keep the stuff? Sell it? Give it as gifts?   What did these modern day crooks do with my money? What did they buy? Electronics? Designer clothes? Drugs? We’ll never know.

What I do know is that in an odd cycle-of-life kind of way, after this experience we will be reverting to older habits. We will no longer be using our debit cards. The people at the bank will be seeing us in person more often because we’ll be there to take cash out from the counter, not the ATM. We will carry cash more rather than use our debit cards. We will use our credit cards, because at least if (no, when) those get compromised it isn’t our money that gets tied up, and things get resolved relatively quickly. I will go back to writing checks more often. Heck, I may become that little old lady at the grocery store tying up the checkout line because I’m writing a check.   The bummer is in this world of speed and convenience, we have to purposefully go back to the less convenient way of doing things just to stay safe. We have to use multiple locks and security systems on our homes, cars, and offices. We have to constantly be on the look-out for suspicious behavior, both in person and online. And we can’t trust machines.

Sadly, there will always be maliciousness in the world, and sneaky jerks will always try to take advantage of others. There will always be the risk of violation. But I still choose to believe that good will win out over evil and we can always rebuild, even if it takes some time…and karma will take care of the bad guys eventually. Like maybe after getting my money out of that ATM, they turned and got run over by a street sweeper. Ok, perhaps that’s a bit harsh. But God willing, they will be caught before they do it to someone else.

Now if you’ll excuse me, I need to channel my mother, make sure everything in the house is secure, kiss my son goodnight, and possibly go stuff my money under my mattress.

Be careful out there.