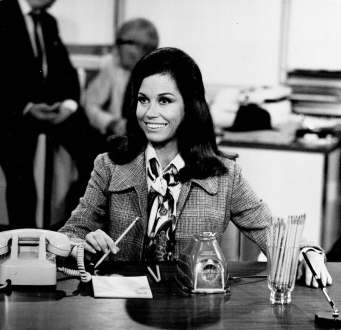 I was 15 years old when the original 9 to 5 Movie released.  I grew up watching the Mary Tyler Moore Show. I was just heading out into the working world after college when the movie Working Girl came out.  I was drawn to the women in each, because they were smart, clever, skilled, and strong, even when faced with a lack of respect.  They dressed up to go to work, where there was a community of other strong women and apparently very wacky and often incapable men.

My mom didn’t work outside the home, but she managed a house and family of six plus many others who flowed in and out of our lives. She did volunteer work, she was a Cub Scout Den mother and a 4-H leader.  She too was smart, clever, skilled and strong. My sister, 7 years my elder, went off to college and never looked back – she charged into the excitement of the fashion industry, traveling the world, and is also, of course, smart, clever, skilled and strong.

In my youth, the thought of combining all of that with the perceived glamour of being a career working world woman had huge appeal.  I didn’t know what I was going to do with my professional adult self.  I knew I wouldn’t be an astronaut like Sally Ride, or a Justice like Sandra Day O’Connor.  My dreams of being a professional cowgirl were dashed when I realized that would mean actually taking care of, and training, the horse.  My dreams of being on Broadway ended with my lack of singing and dancing skills.  My desire to be a Vet dwindled because I hated seeing animals in pain and couldn’t handle blood and guts.  But being one of those dressed up sassy office working women?  I could do that!

Role models were different in those days, and women in the workplace were still struggling in many ways, but to me there was never a doubt in my mind about our abilities and strength. I was going to take on the world in my double-breasted suit and shoulder pads.

In my very early work years doing summer jobs, co-op, and my first real job out of college, I learned how to act professionally. I learned how to get to work on time.  I learned how to deal with older creepy flirting men. I learned how to be respectful and earn respect. I learned how to make mistakes and try to fix them.  I learned what layoffs were.  In those early years, my mom was totally supportive even though I was venturing into a type of lifestyle she hadn’t led. Her no nonsense practical advice was invaluable in any environment.  I remember coming home abruptly mid-morning one day from my first summer job (I inspected microchips for a local factory) because my period had arrived unexpectedly and I had bled through my light summer pants.  I was mortified, I was in tears, I wanted to hide from the rest of the world.  My mother told me to get cleaned up and changed, and to head back to work.  It was the last thing I wanted to do simply because of sheer embarrassment. Then she told me that first of all, very few people probably even noticed. Then she said that every other woman there had been in a similar situation at least once in their lives, and understood. And every man there was thanking God he wasn’t a woman because we woman deal with situations like that and keep going.

As time went on, I did get to wear those “fancy” corporate outfits – suits, dresses, pumps, nylons. I have sat in on big meetings, made presentations, traveled, participated, managed projects and people… all of the things that seemed so exciting in my youth.  I found out it isn’t glamorous, and it is a lot of hard work. It meant early mornings, late nights, and stress and anxiety before I was mature enough to know how to manage stress and anxiety. Yes, there were a whole lot of high points and some amazing life-long friends and associates made, but it never was quite like I had expected back when I was watching Dolly Parton, Jane Fonda, and Melanie Griffith.

Contrary to what I thought I wanted in those early years, I never did become a CEO of a large corporate conglomerate in a skyscraper in a big city.  I instead found jobs and employers, or perhaps they found me, who were better suited for who I am, and who I became.   The irony now is that 30 years after starting my adulting climb up that supposed corporate ladder, I’m the happiest I’ve ever been working for a small company, doing what I love, where we can wear jeans and flats every day.

We go through so many phases in our real women working lives. I see young women like I was, fresh out of college, all energy and eagerness, ready to prove themselves, ready to take on the world, ready to climb to whatever heights they want.  I’ve reached the stage where I’m happy to pass the baton.  Let them learn to be professional, learn how to get to work on time, learn respect, make mistakes and improve on them, let them figure out their paths and find their role models. Some will become CEOs, some will become Broadway stars, some will become stay at home moms, some will be doctors, some may even become astronauts.  If they want to, they will wear suits with shoulder pads, or scrubs, or robes, or jeans.

I’m not saying I’m done learning, working, growing, making mistakes, and finding new paths.  But I’m pretty much done wearing shoulder pads and nylons (unless for special occasions) and feeling like I have to prove I have a brain.  My energy is spent not on climbing a ladder, but putting the most I can into enjoying my days, at work, with co-workers, with family and friends, and in making a difference, no matter how small.

My wish for those “I was them once” women is that their journeys have more ups than downs, that they learn the art of handling stress, they find a bit of glamour, and most of all that they know they are smart, clever, skilled and strong.  Just like Mary Tyler Moore.