“You better live every day like it is your last day, ‘cause one day you’re gonna be right.”  — Ray Charles

Today’s topic will at first seem rather morose, but if you’ll bear with me, you’ll see where I’m going with it.

This weekend while visiting my dad, I went to pay my respects at the cemetery where my mom is laid to rest.  Mom was a true environmentalist before it was cool to be “green”.   She chose to be buried in a beautiful small wooded cemetery on a hill with a beautiful view, in the same town where she and Dad had built their retirement house.  Ever practical, she requested a flat stone so “they can just mow right over me.”

The unfortunate part is now that cemetery is half an hour from my Dad’s current home, and it is a minimum of 4+ hours from any of us kids.  Dad doesn’t get around as easily as he used to, so her plot isn’t visited regularly and it needed some tending.  However, it was really nice to see that the daffodils we planted years ago by her stone have naturalized, multiplied, and are blooming and beautiful.

My visit happened to coincide with the fact that my husband and I are currently in the process of updating/finalizing our Wills. And as part of that, I would really like to include our wishes as to where/how we’d like to be laid to rest. (Which of course we hope is 40+ years down the road).  I’d rather not have to force my son into making that kind of decision on his own when the time comes.  One problem. ..neither of us have any idea what our wishes are on that topic!  I was hoping some divine intervention would strike while I was visiting mom.  But nope, of all the signs she sends me, this time she is apparently leaving the decision up to me.

I got to thinking how for our parents, our grandparents, and the generations before them, there were usually “family plots” in a home town.  Several generations of family would be buried in close proximity to each other, and space would be planned for future family members to join in.  While at the cemetery this morning, Eric roamed around reading other stones, and several older ones indicated several family members buried together.  From a geneological and historical standpoint this is pretty handy.  It is also nice as it gives future generations a place to go to pay their respects, and to feel close to those who have passed.  But in today’s world, we have all gotten very spread out. Not all family members live in the same town, let alone the same state anymore. As for my family, if I put an “x” on the map as to where each sibling, aunt, uncle and cousin lived, I’d pretty much cover the United States.   I grew up in Central New York – but no longer feel an overwhelming bond to the area, nor do I have any relatives currently buried in my home town.  I do feel like New England is my home now.  But if I choose to be buried in my current “home town”, will I end up like mom, several hours away from my son or any other family members?

I have considered of course being cremated and having my ashes tossed poetically in the ocean or along a beach.  But then I wonder if that “robs” my son and his future children of having a “place to go” to remember me.   It has really left me in a quandry.  My husband has partially-joked that he’d like to have his ashes put in a small container to hang from the rear-view mirror of his ’68 Charger so he can still go cruising with our son.  I think in a way he may be on to something.  Perhaps instead of being put into an urn, I’ll either be included in the soil around a pot of daisies, or be encapsulated in a really fabulous, stylish high-heel shoe.  That way, while my son is trying to figure out where to put me,  I’ll be pretty to look at. 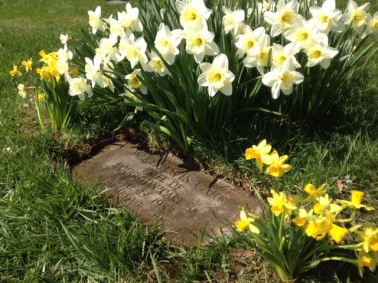