And That’s The Way It Is… 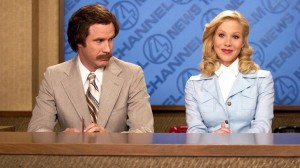 I did it again. I caught myself talking to Matt Lauer. Of course he couldn’t hear me when I told him that I thought he was sounding a bit too smug and egotistical in that last interview. Just like how Tamron Hall can’t hear me when I tell her how much I love her shoes. As a matter of fact, neither of them even know I exist. But that doesn’t seem to deter me.

It is a funny relationship we Real People have with Newscasters. We don’t see them as celebrities, really. But clearly they aren’t like us either. Anyone who earns several million dollars a year and spends their days talking to anyone from a Muppet to the President of the United States is not your normal average person. Yet, we somehow feel connected to them. As a matter of fact, without them even being aware, we are in personal, committed, first-name-basis relationships with them. We count on their reliability to be there for us every day, without fail. We look into their eyes, critically review how they look, and yes, sometimes even talk to them. We welcome them into our homes each morning, or each evening, as part of our daily routines.

Because of this personal relationship, we feel we can be critical, and play favorites.   And oh, boy, do we play favorites. I find it fascinating that we each have allegiance to a particular network, or news team, and we become pretty much diehard fans, rarely changing channels to watch any of “those others.”   Want an interesting conversation starter? Ask someone which news program they watch, and why. Our answers can be anything from “I’ve just always watched them” to “I love that particular person” to more in-depth perspectives on which show “really reports news vs. fluff.”   In reality, they all have become about 80% fluff, and they all report on whatever is going to make the biggest headlines and get the biggest ratings… but I digress.

Our loyalty and fascination is not only with the National News….many of us get attached to certain local channels too. And with the local Anchors, we feel even more personally connected to them – likely because there’s a greater chance we may actually meet them, or see them in our communities. Or, maybe, they just seem more “real.”   Just this morning, my husband was passing through the kitchen as we were preparing to head to work; he glanced at the TV, and said “Is Tom on vacation?” I replied that I wasn’t sure. He said “Huh… this woman who’s subbing is ok, but I really like it better when both Tom and Emily are on together.” These sorts of conversations are not new to us. We talk about people we’ve never met as if they are friends, or we just had them over for supper. Last week we discussed how Emily seems to be more happy now that she’s engaged. A few years ago, our favorite local weather man hit the “big time” and went to work for the Weather Channel, then moved on to the Boston market… we have followed his career path as if he’s one of our nephews. “Oh, look, honey, Erik is on, he’s looking good, isn’t he?”

I am reminded of my childhood when I’d watch the Lawrence Welk Show with my Grandmother, and she would chatter on about the cast of that show as if she knew them personally as well. She knew who had gotten married, who had children, how long they’d been on the show. It was rather amazing to me then. Now, of course, I realize I sound just like her. Oh my.

With all of the modern ways we have of staying in touch and up to date on news and events – including social media, cable news networks, getting urgent information pushed to us via our mobile devices – there is still something about good ol’ fashioned broadcast news. Sure, there are some of us out there (especially the younger generation) who don’t watch “The News”, and instead absorb information in other ways.   But a remarkably high number of us still default to our “friends” to keep us informed.   Like the comfort of a well-worn blanket or a favorite old sweater, we automatically tune in. There may be times when we don’t like what we see, and we may get frustrated or complain. I know there have been times when I have gotten extra critical about how they present the news, or the fact they repeat themselves a dozen times in thirty minutes. I have grown weary of how much bad news is presented. Like many others I’m sure, I have been known to even turn them off in disgust.

But at some point, I always go back. And they are still there, still cheerfully pretentious, still telling me what they think I need to hear.   And while I’m emptying the trash, making lunches, feeding the dog, and deciding what to wear for the day, I will get all caught up – not just on the news of the day, but on the talking heads themselves. I’m sure they missed me.