We women are strong, smart, independent, and fiercely tenacious. We’ve worked hard for a lot of years to reach as close to gender equality as possible with the men of the world. Although it isn’t perfect, we have done a lot to level the playing field. Speaking of playing fields, when I was in eighth grade, I was on the first-ever girl’s soccer team at my school. Imagine that — seems kind of crazy now that women’s sports weren’t always a thing. We’ve come a long way, baby.

Gender roles have thankfully melded to a point where for the most part, what we do is not based on who, or what, we are. Household chores are shared. Men have learned how to cook and clean, women have learned automotive repair and carpentry. Guys can be “house husbands”, and at some point there will be a female President. Just ask Clair Underwood.   Finally the words from that famous song in the musical Annie Get Your Gun have come true: I can do anything you can do, better.

So in the average household, we women know how to do whatever the men do, and vice versa. The difference now is that we each choose what we prefer to do. Hence why I firmly believe that we still have Girl Jobs and Boy Jobs. Not because we aren’t capable. More because we’d rather have the other partner do them. Sure, some of those tend to be traditionally gender specific, but that’s ok.

For example, I know the basics of how to change my car’s oil. I know the basics of changing a tire. Yet, thankfully, I’ve never had to do either. Actually, I did have one day many years ago when I got a flat, started to prepare to attempt to change it, and a nice guy stopped to help me. Ya know what? I let him. Just like I let my husband do my all my oil changes now. He doesn’t mind doing it. Similarly, my husband knows how to cook (at least to some extent) and clean toilets and could probably even figure out how to iron. But he’s happy to let me do most of that, and I don’t mind. He does all of the yard work and mowing, I maintain the inside of the house.

Over the years, my husband and I have developed unspoken rules for our division of labor. We know each other well enough that we just step up to handle certain things that the other one doesn’t want to do.   In my world, Girl Jobs generally involve making things look better, smell better, and feel better. Cleaning, repairing, cooking, gardening, nursing, shopping – all mostly mine. As for the Boy Jobs, well, those include anything that is gross, yucky, or really dirty. I get the heeby-jeebies just thinking about having to clean out the shower drain, so that’s a Boy Job. Checking the pool skimmer basket for bugs or critters, that’s his too. Getting on a ladder to clean the gutters, yup, that’s gross. Boy Job.   Yet the guidelines of yucky stuff are not always clear-cut. Unpleasant duties with the dog or our human child fall to me, like cleaning the dogs ears, treating the sores on his feet, and cleaning up vomit.  Insect killing, that goes to whichever of us is either closer or feeling braver at the moment.

Doing the dishes, that’s a toss up as to who’s got the energy to tackle them. Emptying trash, that’s a joint effort.

I will admit that there are times when there’s no compromising or sharing, and a line is drawn – usually by me – and I have no qualms about deeming something to be a Boy Job. A few days ago I discovered that a rodent had taken up residence in my car.   I didn’t see the little beast, but I saw the mess he had made of a roll of paper towels in my trunk. I parked the car in the garage, reported my findings to my husband, then told him I would not be driving that car again until it was rodent free. He obtained a couple of traps, set them, and sure enough, caught the mouse and disposed of it. I did feel badly that the poor little thing had to meet its demise that way… if I had been alone, I probably would have purchased a Have-a-Heart Trap and hoped for the best. But my husband’s process was more efficient and productive. And I didn’t have to see it or do anything about it. Hubby even has plans next week to see if he can find and clean out whatever nest Mr. Jingles likely made in my wheel wells. See? Dirty Yucky Job = Boy Job.

There’s plenty of equality in my household.  There’s a lot I could do on my own if I had to, but luckily, like any good partnership, neither of us has to carry the full burden. We respect each other’s abilities, and my husband would never consider me to be in any way weak or incapable. We real women are smart, independent, brave and don’t “need” a man to save us.

Unless there’s a rodent trapped in the trunk. 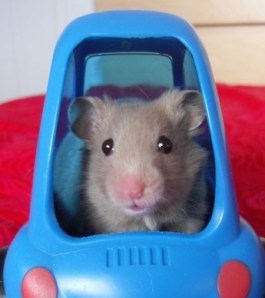